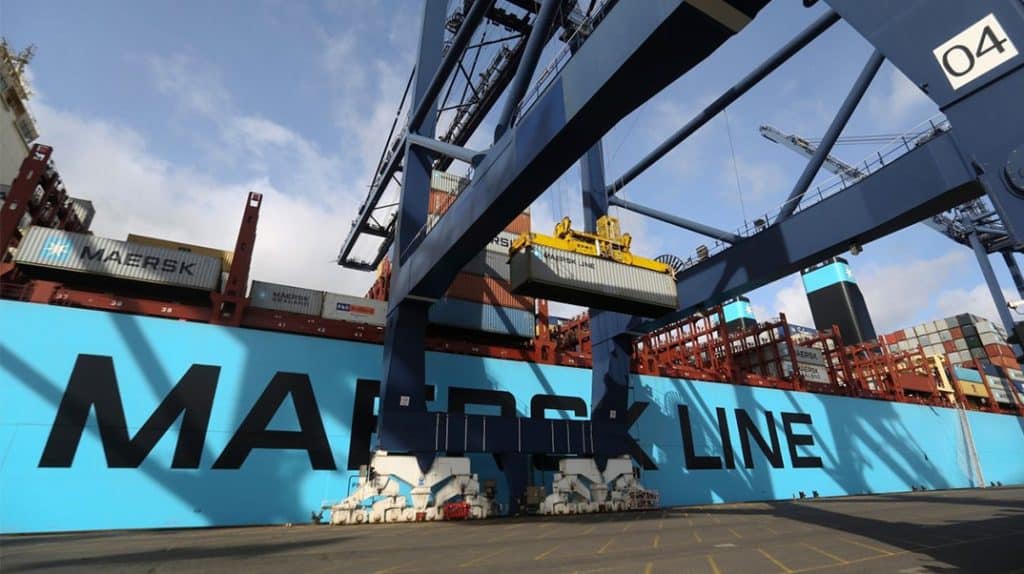 Danish shipping giant A.P. Moeller-Maersk AS swung to a first-quarter loss and warned that rising trade tensions between the U.S. and China could cut container growth by up to a third this year.

Maersk’s warning adds to an increasingly bleak outlook for the container shipping industry, which now expects the tariff-filled trans-Pacific dispute to be a significant drag on earnings. Demand for shipping consumer goods, manufacturing parts and other anchors of global trade is waning at the start of the season when retailers typically stock up for the year-end holidays.

Mr. Skou said he expects the concerns over trade tensions to shift to U.S.-Europe relations once a resolution with China is reached.

Maersk shares tumbled more than 4.5% on Friday before recovering to change hands around 2% lower at 7,228 Danish kroner apiece ($1,084) in afternoon trade in Copenhagen.

Maersk, a trade bellwether controlling nearly 20% of container-shipping capacity, reported a net loss of $659 million, compared with a $2.73 billion profit a year earlier. The loss included $552 million booked for discontinued operations. The company’s earnings a year ago were boosted by the sale of its oil business.

Maersk kept its full-year earnings outlook at around $5 billion. Adjusted earnings before interest, taxes, depreciation and amortization—which excludes impairment charges—was $1.24 billion in the first quarter, up 33% from a year ago.

Ebitda at the Maersk Line container shipping unit jumped 42% to $927 million thanks to a sharp improvement in operating margin to 13.4%.

The company said it is launching a new dividend policy, aiming to pay out between 30% and 50% of its underlying earnings, which will be implemented starting this year. Maersk also said it intends to buy back shares worth up to 10 billion Danish kroner ($1.49 billion).

The trade standoff between U.S. and China looks set to curtail growth in trans-Pacific seaborne transport this year if no settlement is reached. Higher tariffs the U.S. imposed last year triggered an increase n volumes as companies pulled forward purchases and shipments to get ahead of potential new levies. The higher levies the Trump administration has moved to impose this summer include tariffs on more consumer products that are the backbone of container shipping, including finished electronics, furniture and other retail goods.

Shipping industry measures show freight rates, which peaked at the end of last year driven by cargo owners front-loading cargo to avoid tariffs, have been slipping this spring amid declining volumes.

“The tariffs are the biggest negative risk that can seriously hit volumes and earnings,” said Jonathan Roach, a container shipping analyst at London-based Braemar ACM. “The optimism we had just a few weeks ago when we thought a trade deal would be signed has evaporated. There is a lot of uncertainty out there.”

Maritime data provider Alphaliner this week cut its container volume growth estimate for this year to 2.5% from 3.6%.

Chinese shipping executives say they have withdrawn box capacity in the trans-Pacific route since the first round of tariffs were introduced last summer. Cosco Shipping, the world’s third biggest box-ship operator, has removed 10% of its carrying capacity on the route since the end of last.

U.S. container imports into the West Coast fell 0.5% in the first quarter from a year ago, according to Bimco, a shipping industry group, and exports from those ports most exposed to trans-Pacific trade fell 18% in the same period.